"I fell properly in love with the idea of competing on the Royal Automobile Club 1000 Mile Trial when I happened to be present at the finish at Woodcote Park in 2015. I was just blown away by the atmosphere, the camaraderie and most of all the wonderful collection of vehicles that you might only ever see in a museum actually being driven around the British countryside in all weathers"

After a few years getting the hang of historic road rallying 2017 was earmarked as my year to take on a further challenge, and the choice finally came down to taking up stage rallying so I could fulfill a dream and do the Roger Albert, or going pre-war so I could compete on the much-vaunted Royal Automobile Club 1,000 Mile Trial.

Have you seen the latest rules and regulations affecting both competitors and organisers alike in stage rallying these days? The Health and Safety brigade and fun police have got their grubby little mitts on it just like they have on so much of society these days, to the point where it really made me wonder “What’s the point?” – it seems I’m not alone in thinking this as numbers, particularly of historic cars on stage events, are well down on a few years ago. I’m pleased to say the Roger Albert seems to have a good entry now, so it’s not all doom and gloom, but it was enough to make me look again at the pre-war idea. Anyway, I took up road rallying as an antidote to the boredom that set in when I gave up motorcycling, and we all appreciate the risks associated with that particular pastime and sport, so a pre-war car with skinny crossply tyres, drum brakes, no roll cage, no roof, no harnesses, no helmets, no Nomex or HANS devices and zero driver aids seemed like the perfect solution!

I fell properly in love with the idea of competing on the Royal Automobile Club 1000 Mile Trial when I happened to be present at the finish at Woodcote Park in 2015. I was just blown away by the atmosphere, the camaraderie and most of all the wonderful collection of vehicles that you might only ever see in a museum actually being driven around the British countryside in all weathers. Talk about historic! These were straight out of the Biggles and Agatha Christie books of my childhood; cars from the Jazz Age and a time of enormous technological innovation – a petrol head’s dream really.

But what was I to use? My budget was modest, so no Bentley, Talbot 105, Aston, BMW or Bugatti for me. I was convinced I’d end up in a Riley, and I did a load of research on exactly what I wanted, but nothing suitable appeared. MG then? Mr Crosby seems to like his TB, but sadly rare as hens’ teeth. I’d check all the classic car sites, auctions and eBay every week at least, and all I saw was the prices of the favoured 12/4 engined Riley Special gradually double in price in the space of a year. Then, just as I was giving up, along came a 1938 Morgan 4-4 on eBay, it was just before Christmas, my bids quickly reached the very reasonable reserve and I waited to be outbid, but nobody did, and I was soon the proud new owner. Much work had already been done by one of the marque specialists, but it was soon clear the car hadn’t been used “properly” in many years, so I asked Kevin Savage to work his usual magic. About this time, before I had even turned a wheel in the car, I injured my left leg hill walking and was going to be unable to drive for at least three months following an operation to reattach my quadriceps muscle. When I finally got to drive the little Morgan, I got the fright of my life! Crikey! Weirdly vague steering, zero brakes, rock hard suspension, no power and no grip – I really wasn’t sure this was quite what I had signed up for!

Richard Crozier and I decided we needed to do a proper shakedown event before the 1,000 Mile Trial, so I decided to drive down to Kent to do the Hughes Rally in early June if Kevin Savage could get it ready in time. With just a day to spare I was able to pick the car up and drive back to Manchester from the Yorkshire Dales – and the news was fairly good – we had brakes! The following morning, I set off bright and early to try to travel the 250 or so miles to Darkest Kent mostly on A and B roads. When your final velocity is approx. 60 mph on the flat, avoiding motorways is a no-brainer. I got as far as Buxton before the radiator decided let go, racing an Audi up the A515 out of town (well, I was racing, he was just pootling along at a normal pace!), and I was soon enveloped in steam. With a bit of help from the RAC I was soon on my way and the miracle of RadSeal held well enough for me to get to Brands Hatch Morgans before they closed and have a look around their magnificent workshop. Richard flew in from Scotland and we went for a drive – having come straight from the cossetted confines of a full stage car to be sitting out in the open-air sans belts, sans helmet, sans everything was almost too much for him, but he soon got into the spirit of it and we decided we were just going to have a bit of fun. We made it through to the lunch halt on the Saturday before the rad let go again, putting in some very respectable times on some of the more nadgery tests and more than keeping up with the flow on the regularities.

After a bit more sealant (RadWeld this time!) I attempted to drive home after staying with friends in Dorking, but before I had even reached Guildford the clutch was making the most awful noises, there wasn’t enough power to climb the steeper hills and the oil pressure had dropped to almost zero. Time to beat a hasty retreat and get the train home. By the time I finally got the car to Kevin almost week had passed and I had very serious doubts whether we would have her ready for the 1,000 Mile Trial in just 4 weeks’ time, especially when it was clear that amongst a long shopping list of rocking horse droppings and hens’ teeth was going to be a full recore of the rad. I have no idea how he does it, but Ingleton’s very own Dumbledore once again had the car ready just in time and we were on our way.

Arriving at the rally start at the Oakley Court Hotel, a magnificent Gothic pile on the banks of the Thames, it soon became obvious that my tiny 40 bhp ash-framed buzz box was going to be seriously outclassed, but I contented myself with the knowledge that the crew can make up for a lack of “go” with a lot of effort, and we’d done well on the Tests eight months earlier. So, given a fair wind and some reliability, we set off in hopes of a top 10 finish and doing well in the class, which was full of glorious Astons, ably supported by the cheerful Ecurie Bertelli boys, and a gorgeous, historically significant Fraser-Nash.

Getting the Morgan off the trailer I discovered that the new thrust bearing was making one hell of a racket – it felt and sounded like it would shake itself apart and probably take my toes of whilst making its escape, so a hurried message to Kevin, who was deep in Greystoke on a rally at the time, finally yielded the advice I needed and just before the start I managed to make the necessary adjustments. Chuffed with my amazing mechanical prowess I put the tools away, packed everything up and was about to join the queue for the start when I tried to put the car in gear I suddenly realized that the clutch now didn’t operate at all. Nothing. Hmmm, panic stations! Maybe I’d made the adjustment in the wrong direction? Out came all the tools, and, miracle of miracles, we were finally on our way with a perfectly quiet, operational clutch! Our white overalls and summer flying helmets did cause some merriment; (Ed.. The Flying Smurfs I do believe..) well, it’s one way to get yourself noticed, and very practical they were too! As is usual for a driver on these events, I haven’t much of a clue where we went over the five days, averaging 200 miles a day come rain or shine, but I know we headed north, turned west for a bit, then south again in a big circle back to Epsom. We did see some absolutely magnificent country houses, a few race circuits and very nice hotels en route. As is customary on such events there were also quite a few hotel bars involved of an evening, the details of most remaining fairly fuzzy for some reason, but the abiding memory is of some hilarious tales of the days’ adventures, occasionally peppered with much consternation at all manner of delays, breakdowns, penalties, wrong slots and ‘shopping trips’- but all were quickly forgotten.

The little Morgan, second cheapest and least powerful car in the event just got better and better the more we thrashed it around the countryside and proved to be completely reliable. Richard and I both agreed that as well as every new driver being forced to use a motorcycle for a while so they could understand what it’s like to be so vulnerable while they’re in their ultra-safe, cossetted environment, they should also drive a pre-war car for a while and understand just how far we have progressed in a short space of time, and just how long it takes us to stop! I am fond of saying how much safer our roads would be if instead of airbags cars were fitted with spikes sticking out of the steering wheel; it would concentrate the mind, that’s for sure – well, on the Morgan there’s a whacking great nut threatening to do pretty much the same thing just inches away, and it’s much the same in all the cars on the 1000 Mile Trial, so this is driving very much in the raw, and calls upon a lot of skill, commitment and not a little bravery to push on.

As we have come to expect on HERO events in recent years, the organization was seemingly faultless throughout. The route was a revelation. I have no idea how much time it takes to find all those fabulous roads, but the effort is very much appreciated. The marshals were a cheerful and efficient bunch, once again and the support crews worked tirelessly to keep the vehicles running, as ever. The awards reception and dinner at Woodcote Park was a splendid end to a wonderful week where, just for a time, we had been transported, quite literally, back to a simpler age of fun and adventure.

Oh, and I nearly forgot to mention, we managed a class win and 7th overall, so the plucky little Morgan did us proud – and we can’t wait for next year!!

The 2018 Royal Automobile Club 1000 Mile Trial is now open for entries, read about the event here 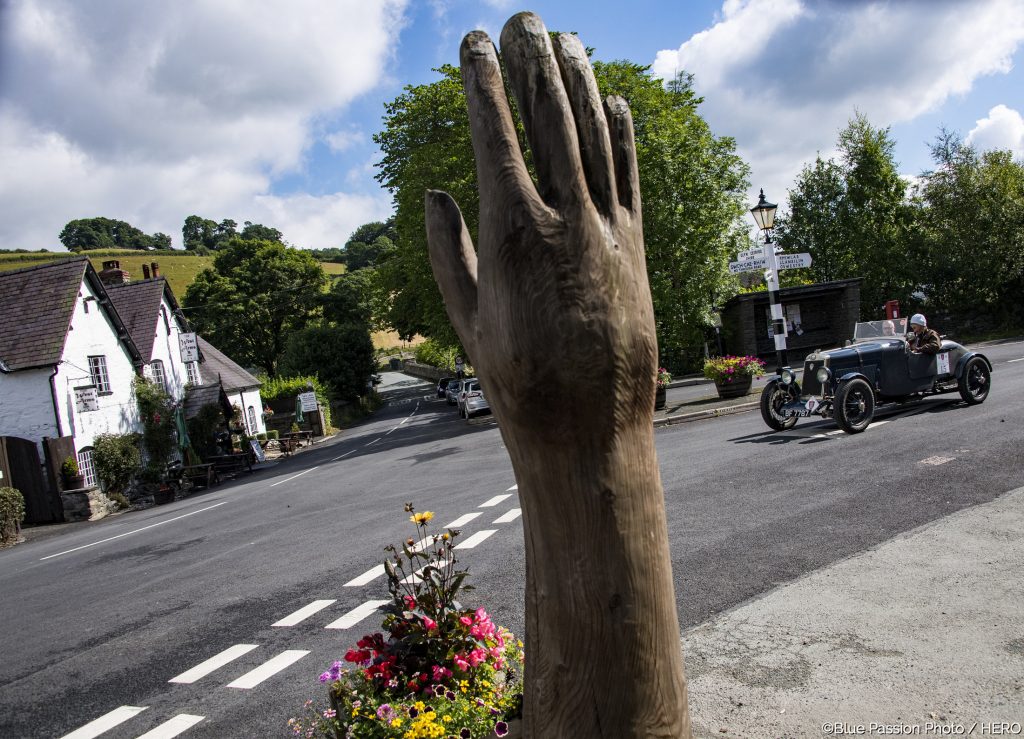 From starting under the HERO-ERA arch at Bicester Heritage, to the last run of the airfield test track at the Bicester site, there were smiles and excitement...

What better way to raise funding for vital SMA clinical tests than to have fun in classic and vintage cars on a tour? 38 teams of two, a driver and navigator...

Last day, last opportunity to climb the leader board or throw the lead away. Keep calm, this is supposed to be fun, after all. Four regularities to sort the...