In all rallying, the days can be long and you have to be ‘on the pace’. On occasion ‘on the pace’ can become ‘hairy’ when getting back on time between IRTCs on mountain roads, or the experience of severe brake fade on a testing regularity descent. At these points, a good navigator will shout ‘enough!’

First, the car. Our MGB Roadster, 1948cc, is strong, comfortable, totally reliable, albeit now with 24000 rallying miles under its belt. A 100% check-over was undertaken, plus new clutch, disks, pads, hoses, belts and lines and all fluids changed. Spare fuel pump and wheel bearings augmented the mini spares package we always carry. Space was found for some extra oil, brake fluid, and basic tools. I kept the Winter tyres on, as I quite like them.

On Friday 21st 79 teams assembled at Brooklands – 38 all-male, 38 mixed, 3 all-female. There was an air of excitement; old friends were greeted, new friends quickly made under the ‘we’re all in it together’ mantra. Scrutineering was friendly and efficient, with an emphasis on assisting the entrants and checking basic safety requirements. This set the organisers’ tone for the whole event – helpful, very friendly, and a desire to get you through to the finish.

A goody bag, 4- inch deep set of road books (less daunting than first impression), time cards and ferry tickets were issued, with strong advice not to lose anything! Then into the briefing; the HERO team introduced themselves. A number of crews were novices in the proper sense – virtually no rallying experience; briefing was targeted to get them into the event, with questions and practical advice sessions.

Saturday dawned and, flagged off by the Portuguese Ambassador, we were rallying! A scenic run to Portsmouth via the New Forest, 2 tests and 4 regularities. Spirits were heightened when we passed a farmhouse, the family cheering us on and displaying a large banner ‘Lisbon or bust!’ The adventure had begun.

Daily start order was – welcomingly – the antithesis of seeding, and varied by an ingenious if mysterious system, so you were running with different cars and making new friends. This was fair to everyone.

The devising of the route can only be described as brilliant. Navigation wasn’t complex, by straightforward tulip and jogularity. Guy Woodcock had inserted some clever ‘long way rounds’ for approaching IRTCs, and in making turns there had to be blind faith in the trip-meter when it told you to turn down a seemingly innocuous track or alley. Nevertheless, certain crews, particularly from Portugal and Hong Kong, seemed to think Guy’s route too easy, and ‘devised’ their own directions for approaching the controls, often in the face of the main rally! However, they were having FUN. Link sections included observation questions.

‘Scenic’ is an understatement. We took in delightful villages and many sinuous mountain roads and passes, with the highest point the 1349 metre Col de Peyresourde of Tour De France and Chris Froome fame. The Dordogne, the Pyrenees, the vineyards of Rioja and Douro, Mateus and Sandeman, the Sierra de la Penna; the list goes on. The highlight has to be the assault on one of the finest and most intimidating roads in Europe – The Portal do Inferno (‘gates to hell’), including the spectacular ‘knife’s edge’- a section of road at 920 metres with a sheer drop either side of 600 metres.

In all rallying, the days can be long and you have to be ‘on the pace’. On occasion ‘on the pace’ can become ‘hairy’ when getting back on time between IRTCs on mountain roads, or the experience of severe brake fade on a testing regularity descent. At these points a good navigator will shout ‘enough!’, and dash will be tempered by discretion at the expense of a few seconds’ time penalty. (When all the Aston Martin DBSs ‘fell off’ the road one day, it was apparently due to them being Aston Martins and nothing to do with the road conditions!) However, coffee, lunch and tea breaks were generous: in length and quality, and usually in scenic and/or historic locations.

There’s always the end-of-day experience to look forward to. Hotels were first class, with an emphasis on secure parking, high-class food, and the essential decent- sized room with a good bed, proper linen, and quiet! Checking in was streamlined, with bags already deposited in rooms. (How did a 10-ton baggage van always arrive before 70 powerful sports cars?). So the bar could be visited without delay.

The grand arrival was at Cascais, a very pleasant seaside town down the coast from Lisbon; we were warmly welcomed by the Mayor, various dignitaries, and a friendly crowd of locals out on a sunny weekend afternoon. 70 cars are listed as finishers, so 9 seem to have disappeared en route, though there were no daily casualty lists.

Guests of honour at the grand finale dinner – rightly a ‘jacket and tie’ and ‘party frock’ affair – were the Duke and Duchess of Braganza, who apparently would have become King and Queen of Portugal had the Portuguese not been so keen to exert their republican sentiments. The awards were distributed to polite applause. We discovered we’d come 30th overall, and had been fastest in class on every test.

There was the opportunity finally to get to know the marshalls and mechanical support crews who’d been so supportive, particularly as having an MGB we’d seen very little of the latter during the event. It was a long fun evening in excellent company, good food and drink, and a lie-in the next morning!

Along with quite a few others, we stayed on for R&R and the opportunity to sightsee Lisbon. Adding the run back to Bilbao (boat) and home, the car accumulated 3200 miles door to door. Crossing from Portugal to Spain, the border police singled the car out for a detailed inspection of the engine bay (opening the bonnet I said to him ‘engine, MGB’; he nodded, knowingly) and boot, and a lengthy perusal of the log book. Keep up the good work, boys.

Last, the car. 3200 miles, and it worked very hard. 9 hours a day, motorway speeds, mountain ascents and descents, 1st gear hairpins, kart circuits, tests, the lot. A quick check each evening revealed nothing untoward. I donated my brake fluid to another competitor; 1 litre of oil was fed in and on arrival home was still showing overfilled (Millers Classic fully synthetic, 1st time used, sold!). Yes, THE CAR WAS THE STAR.

Was it hard and tiring? Yes, sort of.

However, was it rewarding? Oh yes.

Did the driver and navigator ever fall out? Never(!?).

Was it well organised? Brilliantly.

Would you recommend it? Please, when can we go again? 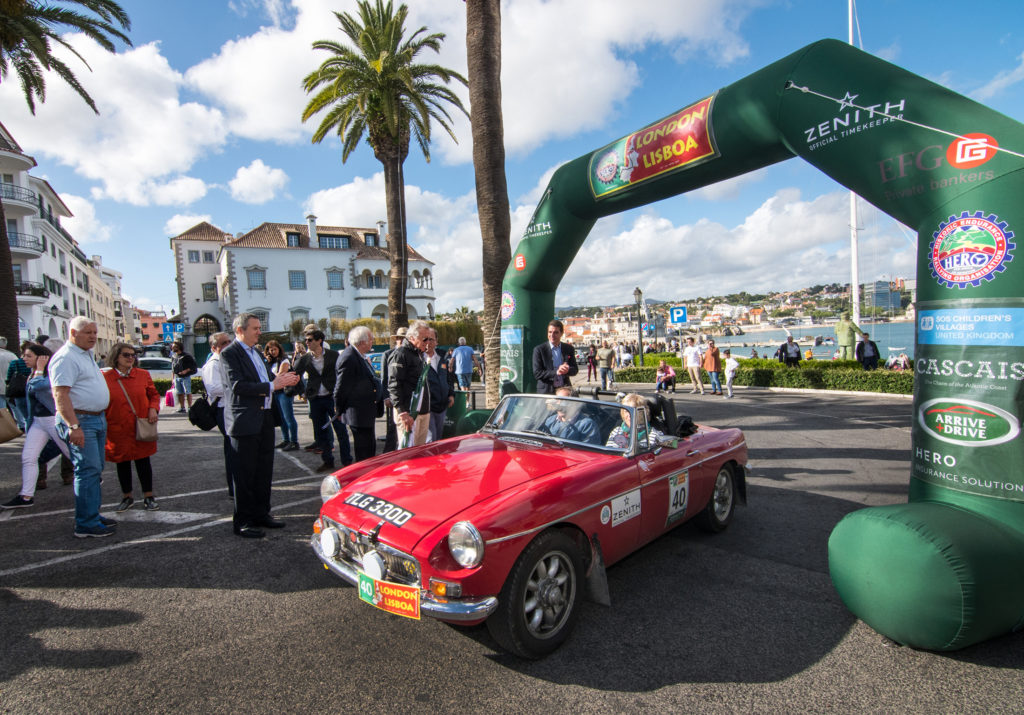