Le Jog? Is it really that tough?

Who won the first ever Gold Medals at Le Jog? This is a question we have been asked many times over the years and we are delighted to bring you the story of Le Jog from one of that very same team, John Kiff, Mr. Le Jog himself.

So, there we were… just going dark and presented with 1500 miles to be plotted onto a road atlas and a few OS maps before dinner at the Land’s End Hotel and no real idea what was facing us (other than Wales at night and not much sleep).   I was just going to have to rely on my years of Motoring News night rallying experience and the odd, more recent, historic rally!

And just how did I end up in Land’s End on that murky Friday evening in early December 1993 preparing to start the first-ever LE JOG?  Well, I blame Evan MacKenzie who was at the time the MD of Penrite Oils Europe and had known John Brown since the days of the Mexico Championship when John was navigating for Russell Brookes and Evan was part of their (ahem!) ‘service crew’.   Somehow, about 12 months earlier, Evan had had a conversation with John about John’s idea of creating an endurance rally in the style of the long-distance British events of the 1920s to ‘50s.  Evan offered to give both advice and support (via Penrite) and in return got a ‘special offer’ entry from Mr Brown.  Of all Evan’s navigators at that time I was the one with most experience of Wales at night so he asked me if I was free for 6 days around the first weekend in December.  Fortunately I was between jobs at the time and when he described LE JOG I accepted with relish.

So we got the route down, marked up the 18 tests, and just had time to  glance at the new-fangled ‘Jogularities’ before rushing back to our hotel in Penzance to get dressed for the pre-event dinner back at LE – it was black tie, as they did ‘in the day’ – a bit of a step up from a rally jacket and a burger in an MN car-park! 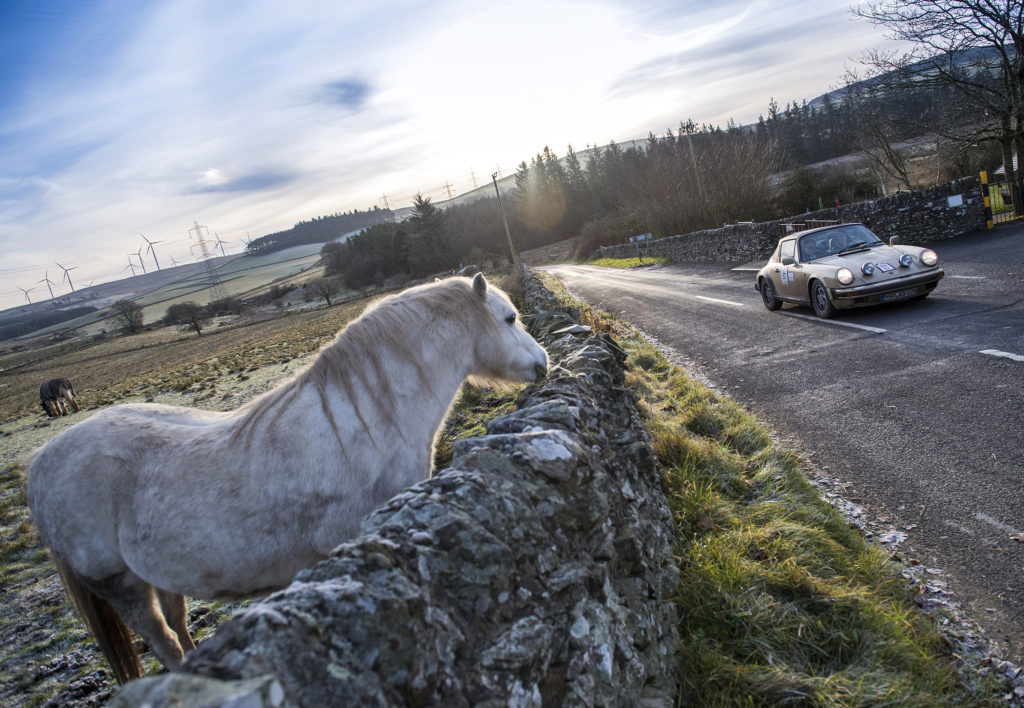 Among the excited and nervous chatter in the restaurant were crews who had ‘been there and done it’ in the days that LE JOG was seeking to re-create and they were in cars from that era – eminent competitors such as Geoff Breakell and Mike Wood in their Alfa Giulia, Geoff Awde and Peter Ward (MGA) and Mike Hinde and Dennis Greenslade (VW Okrasa).  There were other teams with a wide range of motorsport experience such as racing driver Tony Dron – navigated by the much-missed night-rally ace-navigator Colin Francis in a Ford Zephyr Mk2; Dave Whittock and Ernie Waldron in a Cooper S and Ron Gammons and Jayne Bourne in an MGB.  But there were yet others with little, or in some cases, absolutely no familiarity with rallying desperately trying to get some gen over dessert about what they were likely to encounter en route to JOG.  Even those who had done ‘Brown’ events in the past – including the early 90’s historic Targa Rusticana – were unsure what advice to give other than the perennial exhortation to ‘just focus on staying on the route!’

Aware that we were not only to have an early start the following morning but also to only have one night in bed before Tuesday breakfast the wiser crews curtailed the merriment and headed to their hotels. The following morning was bright and breezy – although the same couldn’t be said for all the crews. John Brown signalled his intention for the non-stop nature of the event, and the pressure that was to come, by having a run-out from MTC1 of all of 200 yards before the first test.  This was run around the cliff top footpaths, car parks, access roads and bus stops of the Land’s End complex – something that has become a hallmark of LE JOG

Forty-seven cars tackled that test, the youngest – and the last starter – was a mere 27 years old – a Volvo 122S from 1966 crewed by Laurence and Gordon Grainger.  Contrast that with the youngest in the 2016 event; a 33-year-old VW Golf GTI from 1983.  The oldest car on that first event was the Knill-Jones’ wonderful 1919 Rolls-Royce Silver Ghost who went on to win a Silver Medal.  I say ‘car’ but in fact, it was more of a rolling chassis; absolutely no bodywork rear of the aero-screens, just two seats and a ‘trunk’.  Hardy types, these VSCC people, and their fine machine was an amazing 74 years old at the time.  The oldest car in 2016 was a mere 63 – Ian Glass’ Flying Tortoise (aka Ford Popular).  Ian having started in 1993 at number 9 piloting a Marauder – no, not the military vehicle but a ‘sports’ car based on a Rover 75 of which only 15 were made – I think he went on to do all the John Brown LE JOGs in Rovers of one sort of another. 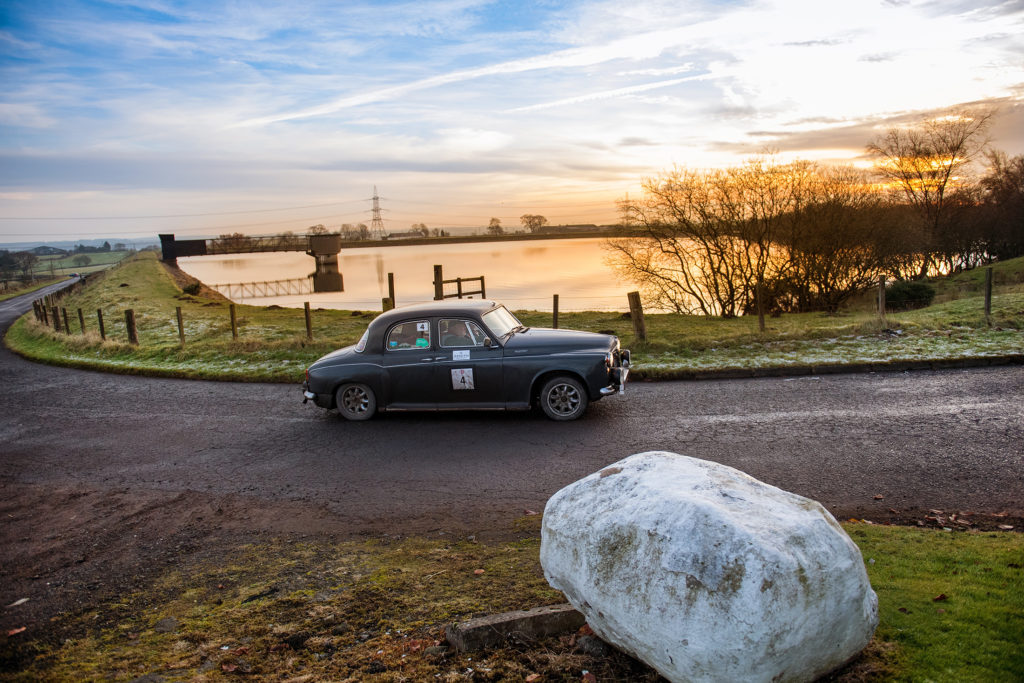 The Silver Ghost was not the only pre-war car by any means.  It was followed at number 2 by Doug Human and Ray Pearse in a Morris Oxford saloon whose 1548cc side-valve engine wheezed its way to North-East Scotland – and they didn’t finish last, either!  They were followed (and soon passed) by a gorgeous Type 44 Bugatti and three Alvis’s.  A group of four Wartime/Early Post-War Open Cars included an HRG, a Healey Silverstone, Ian’s Marauder and Phil Surtees’ Willys Jeep – the latter being another (virtually) body-less car (vehicle?) with a very well wrapped crew. Phil was one of a number of crews who were to go on to great success in future LE JOGs. Next up were three Lancia Aurelias, then the 50s Sports and GT cars including pairs of Porsche 356As,  Aston Martin DB2/4s and Healey 100s.  Fifties saloons were well represented by MG ZA Magnette’s and also ‘HMS Jaguar’ as John Brown referred to John Atkins’ MkIX. Among the Sixties classes was a very unusual, glass-fibre monocoque Rochdale Olympic of John Blanckley; three Heralds, three Cooper S’s and an adventurous Dutch crew – Jan van der Heyden and John Bekker in a Peugeot 404, a car one would have thought was well suited to endurance and reliability.

So as we left the finish line of that first test and set off in a  north-westerly direction, the adventure that was to become the legend that is LE JOG was underway.  More next time!