We're delighted to welcome Tony Jardine to 'The toughest classic rally in Europe' - Le Jog. The ultra-experienced presenter and past Camel Trophy / WRC GB competitor has decided to take on regularity rallying. 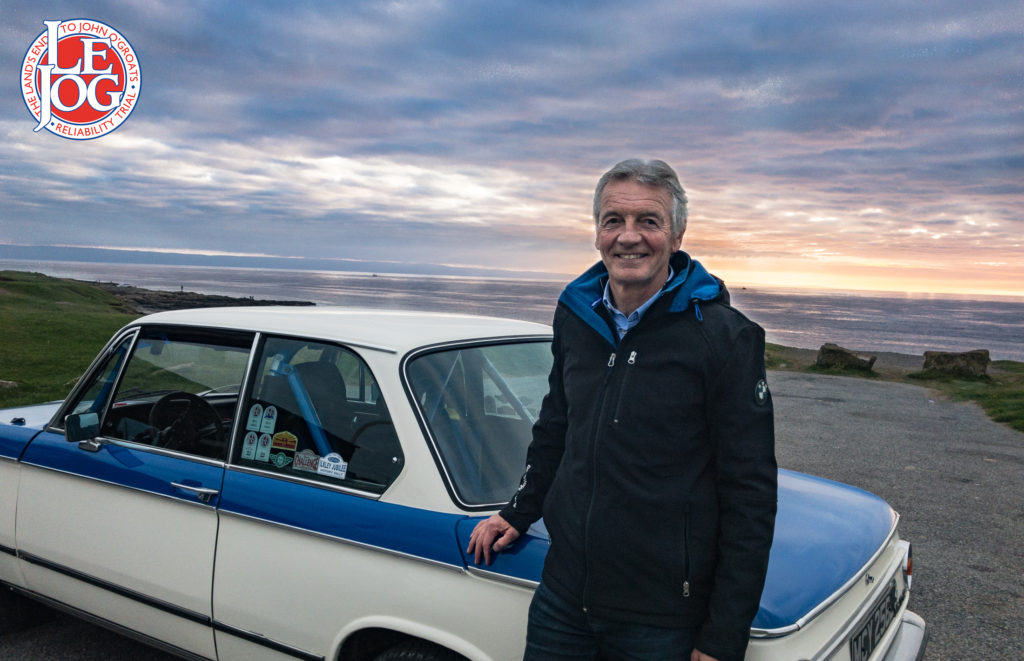 One of motorsports’ highest-profile presenters, Tony Jardine, of BBC, ITV, Sky and beIn SPORTS fame, is to take part in one of the toughest events in the classic rallying world, Le Jog – the Lands’ End to John O’Groats Classic Car event. Tony will join 60 other ‘crews’ from around the globe in a grueling 1500 mile, four-day event that takes the endurance of both car and crew to the edge, whilst testing the team’s ability to navigate and traverse the long, tough course.

Teams try to reach checkpoints at a precise time over a route – not disclosed until the day before the start – which crisscrosses the UK several times using demanding roads, often in the dead of night. The cars and crews competing range from a 1957 MG A Coupé from Germany to a 1985 Saab 900 Turbo from Switzerland, while there are also entries from Australia, Canada and the United States of America.

Although this will be his first classic car rally, Le Jog rookie Tony will use his massive motorsport experience to tackle this epic challenge. He will be navigated by Yorkshire’s Nick Cooper, a classic rally specialist, with a host of great results behind him. The duo chose one of HERO Events’ ‘Arrive and Drive’ fleet to compete in the event – a specially prepared 1970 BMW 1602, to affirm Tony’s strong connection with the marque.

Tony Jardine said: “This will be a very different ‘in-at-the-deep-end’ challenge – the toughest classic road rally in Europe and a totally different motorsport discipline for me, run to the original rallying format.

“I have followed Le Jog on the HERO Events website before and winced at the appalling conditions, with never-ending tests over four days and nights. Despite its grueling look, I quietly nurtured the intent to compete one year. Thanks to Patrick Burke and the HERO team my chance has come earlier than expected – although I’m not sure I’m grateful yet!

“I’m relishing trying to learn the art of precision driving while attempting to play the long game. My goal is to finish, which looking at Le Jog will be an achievement in itself! The last 28 hours are almost non-stop through Scotland, in potentially adverse conditions, so I am expecting fatigue and sleep deprivation to affect me like never before.

“I’ve competed in 24-hour races, seven Arctic rallies, and numerous Camel Trophy adventures, in jungles and across deserts, but Le Jog is set to be the toughest test for me so far!”

Patrick Burke; HERO Events Managing Director added: “We’re delighted to welcome Tony to compete on Le Jog. It’s an incredibly tough event that is sure to challenge his vast experience in motorsport. We have many crews that come back year on year to compete in the event. It becomes an addiction to try and beat the roads, weather, and fatigue that combine to make this a challenge of epic proportions in a modern car, let alone something that has no power steering and a rudimentary heater at the best!”

From starting under the HERO-ERA arch at Bicester Heritage, to the last run of the airfield test track at the Bicester site, there were smiles and excitement...

What better way to raise funding for vital SMA clinical tests than to have fun in classic and vintage cars on a tour? 38 teams of two, a driver and navigator...

Last day, last opportunity to climb the leader board or throw the lead away. Keep calm, this is supposed to be fun, after all. Four regularities to sort the...