Beast from the East Thwarts Guy

I am typing this while sitting in Athens airport having just finished the measure for this year’s Classic Marathon with Anthony Preston... after a pretty intense few weeks of recces and events at the start of the year. 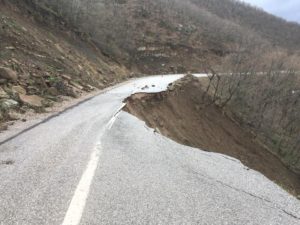 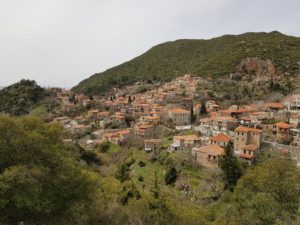 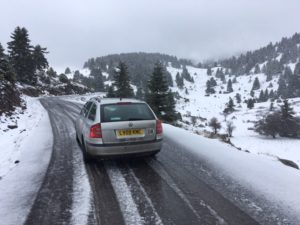 (Will Rutherford assisted, if that’s the correct description) by Bob Rutherford, it had a full range of regularities, mountain passes, lowland technical regs and some snow with the final finish control on the top of the Col de Turini. It was a shame we had such a small entry but those that turned up put up a great battle all week, with Jonno Hancock and Richard Lambley (now with one working eye!) holding the lead for most of the week, only for Daniel Gresly – navigated by Elise Whyte – to take the lead with a day and a half to go to secure a great win.

There were lots of discussion as to whether the event will ever run again, but if the feedback is anything to go by, we will certainly investigate the possibility for 2020 or 2021.

Returning home I was supposed to make a comeback to the navigator’s seat with Paul Crosby on the Tour of Cheshire, but the ‘Beast from the East’ put paid to that and my heart goes out to Mike Harrison and the team for taking the right decision and now sorting the new date.

The weather the following week made the final recce for the Malts fun for me and Graham Parkinson but we got through 95 percent of the route with some interesting conditions, the 88 crews who are planning to compete will hopefully have better road conditions.

Then the Marathon. It was my first visit to Greece and what a friendly country; and the people could not be more helpful, especially our contacts at PHILPA, the Ancient car club of Greece. We had wind, rain, and snow and, eventually, sunshine in the route but some stunning roads and a massive variety of roads but the highlight, if you can call it that, was day four which was an interesting day! Great day’s route from Anthony Preston but on the run to coffee the rear number plate of the Skoda dislodged itself, so we stuck it in the back window and carried on.

Later that morning we had some idiot in a Golf tooting his horn and flashing his lights, so we eventually pulled over at which point he got out of the Golf with a

fully automatic weapon in police uniform… cue me and Mr Preston standing on the road side with our hands on our heads while we were asked lots of questions. Then we accompany the very nice policemen, who while we were standing with our hands on our heads, told us not to worry, to the local nick six kilometres away… cue more questions and checks from the undercover cops now. They didn’t like Antos globe-trotting passport, then a search of the car before we were eventually allowed to go on our way, only after they were impressed by Pete White’s map book! The joys of recceing in a foreign country… but I could be sitting at home in the cold and snow.

That’s all for now, so nothing to controversial this issue, I will no doubt come up with something for next months issue !!